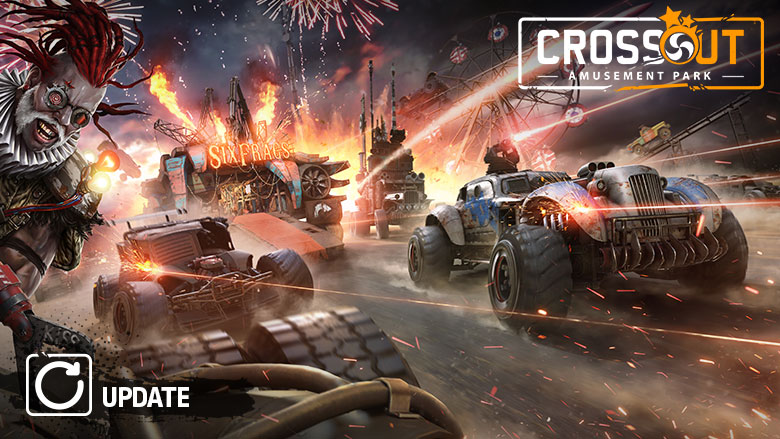 Targem Games and Gaijin Entertainment announce the release of the 0.12.00 “Amusement Park” Content Update for the post apocalyptic online action Crossout. For the very first time players will be able to design and build their own brutal wasteland style amusement parks, test drive their personal armoured vehicles there and invite friends to check out their creations. Crossout has also received destructible environment objects for PvP maps and a new special game mode designed for close combat focused vehicles armed with pin spikes, chainsaws and drills.

The “Amusement Park” building zone is available at the training ground around the player's garage. Players can fill the place with stunt rumps, giant bowling pins, carousel horses, exploding red barrels, dummy armoured vehicles, guard towers and lots of other objects. Amusement parks can be used to test drive freshly built armoured vehicles to check out their driving performance and to try out weapons systems or to just have fun and fool around in the location. Players can also invite friends to visit the amusement park bringing their own vehicles to test drive.  .

New objects for the park are unlocked basically by playing the game. The giant traveling Kaligari circus arrived in the wasteland bringing the “Amusement park” event. Players complete Kaligari’s missions to get rewards that include epic armoured vehicle parts, cosmetic items and also building materials and objects for the amusement park. All prizes that have an impact on battle performance are available for free, but an optional battle pass speeds up the progress and gives access to extra cosmetic items.

© 2010—2023 Gaijin Entertainment. All trademarks, logos and brand names are the property of their respective owners.